Witnessing the scene where the father split the stone by hand, the mother steamed the cake with a wood pot; There were days when my father fell ill and could not split stones, the family lost its source of income and fell into poverty. Therefore, the dream of inventing machines for industrial production and construction kept burning in the young man every day.

“Since I was a child, I have dreamed of opening a shop like this, sometimes thinking if this is a dream or real, until now I still can’t believe what I have” – young man Dang Quoc Vinh, owner of a mechanical workshop 26 years old in Bien Hoa City (Dong Nai). 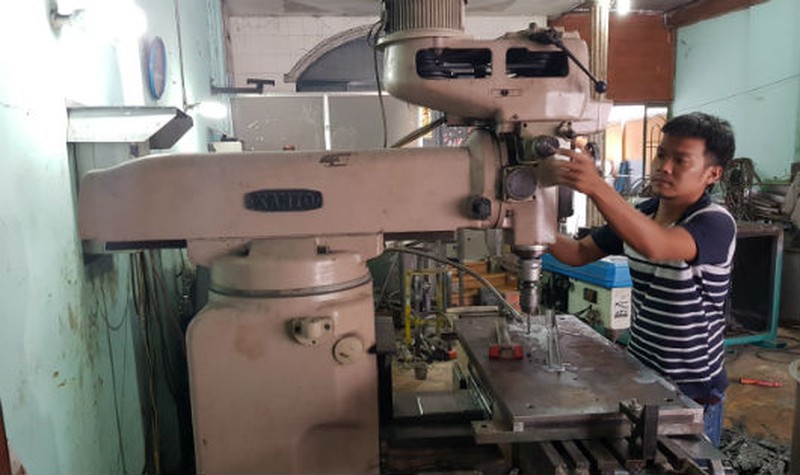 9X engineer is processing a new machine according to order

Vinh’s 35m2 mechanical workshop is located in a small alley about 50m from National Highway 1A in Tan Bien Ward, Bien Hoa City, Dong Nai. In the bustling space of hammers and explosions, 3 workers worked hard. The young owner just guided the workers and talked to us with friendly smiles.

At first glance, no one thought that the mature man was only 26 years old, when we found it strange, he laughed: “Doing this job does not have time to shave anymore, and leave it like this for others. I think I’m old enough to believe.”

Born into a peasant family in Can Tho, Vinh’s childhood was a series of hard days. When he was a child, he witnessed his father split rocks by hand, and his mother steamed cakes in a wood pot. There were days when the sick father could not split the stone, the family lost its source of income and fell into poverty. Therefore, the dream of inventing machines for industrial production and construction kept burning in the young man every day.

Because of that concern, after graduating from high school, Vinh entered the Department of Electrical and Electronic Engineering of Lac Hong University. After 4 years of studying at university and graduating with honors, he was accepted into foreign companies producing robots with a stable income. After working for 2 years, Vinh’s dream with machines made Vinh give up his dream job to open a machine repair workshop and process machines for industrial production. Since then, this job has stuck with the 9X guy.

Starting from the amount of 700 million saved after 2 years of working, Vinh boldly rented premises, workers and bought equipment for production. At the beginning of the start-up with countless difficulties, Vinh now considers them as bloody lessons. The first towel dryer the engineer made did not work, making Vinh almost mentally exhausted. The loss of 150 million does not include the time and effort that discourages young engineers.

Vinh recalls, at first, he opened a factory to hire 4 workers, but he didn’t have much to do. Every day he went back and forth with headaches because of wages and rent. Not to mention, not knowing where to buy construction materials for cheap and the machinery to not work made the young owner take many months to rethink from the beginning.

“It was also thanks to the support of my family that I was able to revive that period, sometimes eating instant noodles for a whole week to save money on workers’ wages. It’s also because I’m too confident but I don’t carefully calculate the way to move, so I stumble like that. Now, every time I think back to that time, I feel “obsessed” and tell myself to try harder,” Vinh said.

Successfully invented a series of machines

After the first failure, Vinh faced the objections of everyone around. This time starting from the beginning, the young man was determined to be meticulous with his work, he consulted his teachers, his predecessors, and learned from experienced people to apply in practice.

But at this time, the funding is not available, many trials have failed, the pressure of rice and rice is always present, but Vinh still does not give up. Many nights he stayed up all night to research and assemble until the machine could run.

After trying for a long time, it is true that God does not disappoint people, he has successfully built a meat press machine of a household ordered for 70 million VND. This machine is used to press round pieces of meat to make the filling. It operates at a maximum speed of 1s/1 piece, depending on the level of the user to adjust to suit the user’s time.

Up to now, after 2 years of starting a business, 9X engineer has successfully built about 20 machines to serve industrial production and construction. In addition, he also undertakes to repair and maintain machinery, process bridges, and factories for construction projects.

“Whoever orders what machine, I make it, not mass-produce it and sell it. The drawing is in my mind, as long as people talk about the machine briefly, I will sketch it and start building it right away. The price of each machine depends on the type and depending on the customer, “Vinh added.

Although after 2 years, everything gradually stabilized, the difficulties with this young man still persisted. Vinh wondered: “There are always difficulties for business people, now it is very difficult in terms of capital and labor. The factory currently has 10 workers, but it is not enough because one group goes to maintain the factory, the other stays in the workshop. Besides, there are many times when customers are late to buy goods and also need to pay for living and production.”

The most recent success, Vinh has created an ultra-lightweight AAC brick cutter that is used to cut dry concrete bricks. This type of machine is more special than other machines on the market that are square, smooth and beautiful cut bricks; The machine is designed to be simple, easy to use, less dusty and the price is much cheaper than the market price.

Every time he starts to build a machine, Vinh always thinks about two issues: cost and can people with little qualifications, unskilled workers use it? After answering these two questions, Vinh began to build machines. Thanks to that, the machines he made are always simple, easy to operate, easy to use and bring high efficiency.

Talking about future plans, Vinh said: “Today’s results are a long process of research and discovery. I just hope that in the future I can build many machines to help people.”

Yuba (Tofu ki) is a common ingredient in Japanese cuisine. It is made by boiling soy milk and removing... read more

Not everyone can understand deeply and read Japanese mechanical drawings properly. So how to read the drawing properly? Let’s... read more

On the morning of May 30 2020, IDEA Technology Joint Stock Company is honored to be the main guest... read more

Collaborative robot. What is this ?

Impossible to avoid ! We hear more and more about collaborative robots or “cobot”. Even our politicians use these... read more

Akira Yoshino – Journey to the Nobel Prize in Chemistry 2019

Mr. Akira Yoshino is an engineer, graduated from Kyoto University in 1970 and got a master’s degree in 1972.... read more

A research team from Kobe University (Japan) has begun testing the use of 5G high-speed mobile network technology to... read more

Overview of the working principle of CNC machines

Automation and Robotics in Agriculture

Automation and Robotics in Agriculture Never before, have the automation and robotics become the popular as at the moment, the... read more

What do you know from the mechanical engineering industry? 4 September, 2021